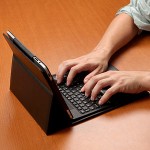 Don’t get me wrong… I love my iPad. However, there are times when the onscreen keyboard just doesn’t cut it, like when writing/editing a particularly long document. These are the times I find my self reaching for my tabletpc Netbook (an Asus EEPC T101MT, a great little tablet netbook with a multitouch display which I will review later).

A standard bluetooth key is just too inconvenient…I certainly can’t use one with my iPad propped on my lap, plus I don’t want to have to tote one around with me. I’ve looked at a number of the offering out there so far, but was reluctant to pay $100+ for one . Enter ThinkGeek, offering an iPad case with integrated bluetooth keyboard for $59.99. 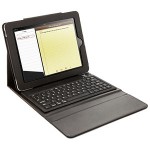 Bulk: Thinkgeek’s case is about on par with my inCase cover. It’s a lot thicker than Apple’s cover, but offer a lot more protection. I never cared for the Apple cover, feeling it to be far too flimsy, too easily dirtied, and not well suited to propping a case on your lap. 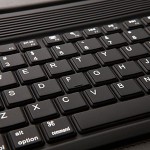 Keyboard: The keyboard is small… a bit smaller than that on my 10″ Asus EEPC101MT. I find it manageable, but if your hands are really big or you really hate compact keyboards, it might not be for you. It’s a “chiclet” style keyboard, which I personally like. The keys are made from soft rubber foam. They are solid enough, but there is no audible “click” to confirm you’ve hit a key.

Usability: I am able to type on the keyboard with the iPad on my lap without it tipping over as long as the wrist rest is not folded back. I can also fold he entire keyboard portion of the case back and hold the iPad in a vertical orientation easily (quite usable as I am recovering from two broken arms). The keyboard easily syncs with the iPad. It also has an on-off switch to conserve power, and a power led to remind you to turn it off. It recharges using an included mini-usb cable which you can plug into you iPad charger (when it is not charging your iPad). 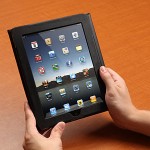 Cons: On the downside it is not real leather, which is to be expected for the low price tag. It also smells AWFUL when first unpackaged, as many faux leather products do. After taking it out of the packaging, I let it air out in my backroom for a day before using it.

Quality: The overall quality of the case is good. The stitching is strong, and all the holes for the case lined up well. One area I could see improved is the flap that holds the iPad in the case. On my inCase case, the flap has velcro to hold it in place. Thinkgeek’s flap, while sturdy, does not. That said, I’ve had no sign that my iPad is slipping out of the new case. Battery life is good, and seemed to live up to advertised specs during my personal testing.

It’s worth it: Overall, I like it, and feel it is $59.99 (plus shipping) well spent. I won’t give up my netbook or laptops any time soon, but it is a convenient way to have a keyboard with my iPad, even if I won’t use it most of the time. The integrated volume/home buttons are a nice touch too, since I worry about double tapping the home button so much for the multitask dock now that I have iOS 4.2.