I ran into an interesting problem with my Mac Pro. I am using it as the platform for my dissertation research in 3D and am triple booting into OSX, Windows, and Linux. Because my research is graphics intesnsive, I wanted to upgrade my graphics card. I was also looking for an excuse to get a better card for gaming in Windows than the official Apple/ATI 570/580 cards Apple currently offers for the current generation of Mac Pros.

Those of you who have Macs or Hackintoshes may know that if you don’t use and efi graphics card, you may run into problems with the boot screen OS selection not being viewable on non-efi graphics cards. If you can’t see the boot selector, you have to boot into whatever is the current “default” OS then use a utility to reboot into another OS. People who say it is not a big deal to reboot repeatedly are full of ****. It is very annoying and a huge time waster, particularly when you are switching back and forth between two OSes on an hourly basis to test on different platforms. 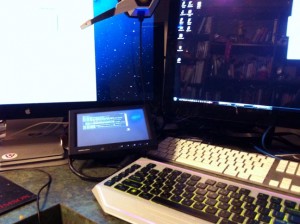 Unfortunately, the choices for officially supported cards for Macs are limited. The latest Nvidia Quadro K5000 for Mac still isn’t out at the time of this writing. My current ATI 580 isn’t capable of the performance I need. So, I chose to upgrade to an Nvidia 680 graphics card with 2 dvi ports and one display port, and added a “helper” card to see the bootscreen. My setup took quite a bit of space my desk with two 27″ Cinema displays and a 14″ helper monitor. Then I added a MacBook Pro with two 27″ Thunderbolt displays to my desk, and there was no room for the helper monitor, so I switched to a tiny little 7″ DVI capable touchscreen display. 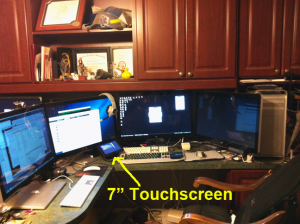 It was a bit pricey, but it is a good solution that a) fits on my already crowded desk, b) gives me a powerful graphics card for my 3D research without spending $2-3K, and c) gives me a kickass graphics card for gaming under Windows. The whole setup works reliably under OX 10.8.2 (Mountain Lion), Windows 7 (you won’t catch me putting Windows 8 on here any time soon), and Fedora 14 & 17.
Category: What's New?